Hookahs in Slovakia 🇸🇰 : Interview with the founder of SmoKing Hookah Lounge 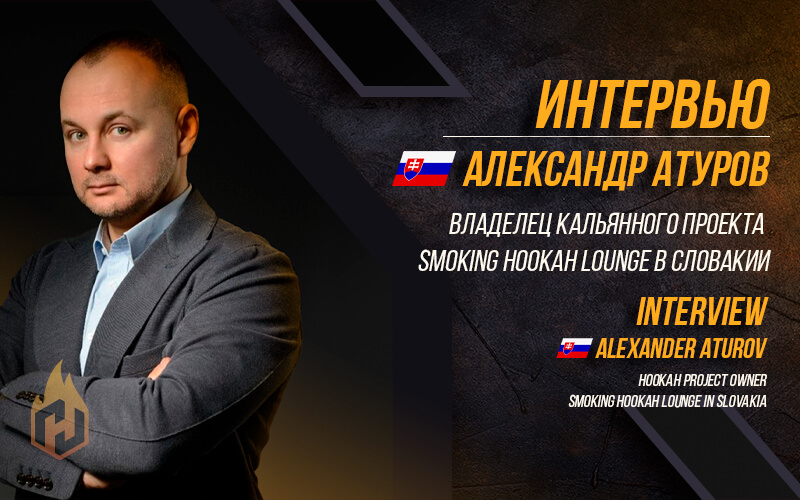 – Hello, Alexander! Tell us, how did you get into the hookah business?

My name is Alexander Aturov, I am the owner of the hookah project SmoKing hookah lounge in Slovakia, Trnava.

I have been smoking hookahs for more than 20 years, I started smoking in Turkey and Egypt as a student.

It was in the hookah business that I got about 4 years ago, when I decided to relocate from Moscow, where I grew up and had a successful business for a long time, to a more comfortable country – Slovakia.

Having arrived here, I realized that it would be a great pleasure to introduce the local population to the culture of hookah smoking.

– Tell us about your hookah lounge: what city is it located in? How long ago was it opened and why did you decide to do it?

Having decided to move from Russia to Slovakia in 2017-2018, I chose to live in the small historical city of Trnava, the cultural and spiritual capital of the country. The central part of the city is a 1km-by-1km long fortress filled with historic buildings inside.

Since April 2018, the search for a place for a hookah lounge with strict criteria has begun: a historic detached building with street traffic and showcase windows, not a basement, a terrace or courtyard, at least 120m2 with the possibility of expansion.

At the same time, I returned to Moscow to complete a full course of hookah training in the wonderful place «Дом Мусье ле Кальяна», the owner of which we are now warmly friends! The course helped me master the basics of hookah smoking, and also gave a powerful impetus to a detailed and in-depth study of the centuries-old culture of smoking.

In September of the same year, 2018, place for a hookah lounge was found. A beautiful building in the city center, built in 1596, but in terrible technical condition. I started the renovation, mostly on my own, since I didn’t yet speak enough Slovak to be able to speak fluently with local builders, explaining exactly what I wanted to get in the end.

The reconstruction took 7 months and in April 2019, the hookah lounge opened its doors for the first time. Since then, we have not closed, except for the time of the annual lockdown in 2020, 2021 and 2022, setting ourselves the main task: to acquaint our guests with the cultural and historical aspects of smoking, to enrich their knowledge with the amazing facts of the occurrence of such a phenomenon as smoking through a device that has dozens of different names around the world. 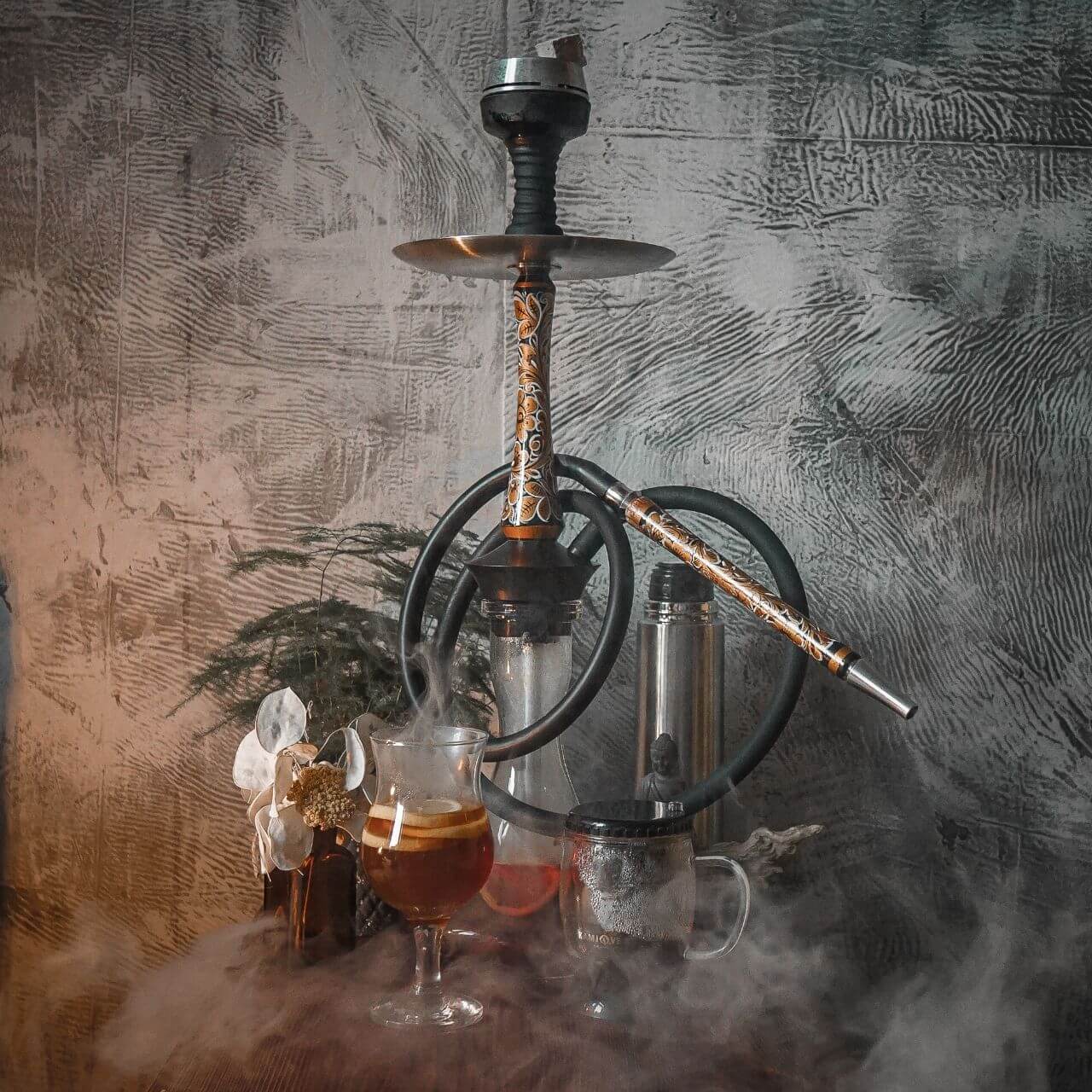 – How many seats are there?

In April 2019, hookah lounge opened on an area of 110m2 and consisted of a separate bar group, 9 tables with 20 seats and 1 VIP room. Already in May 2019, the first part of the 4-table terrace opened, and in 2020, right in front of lockdown, a 4-table cinema hall and a hookah shop opened, which offers novelties of the hookah industry.

In the summer of 2020, after the first wave of lockdown, the terrace was enlarged to 7 large tables, as well as the reconstruction of the second part of the building, where the cinema hall is located, and the library will also be opened. In the spring of 2022, the terrace will be expanded to 11 large tables and the total internal area of the lounge will be up to 250m2.

– How many hookahs are there in the hookah lounge’s collection?

Since opening, I have tried to keep as new and high-quality hookahs as possible, as well as limited versions of hookahs. Currently, there are more than 50 positions in the hookah park.

– Can you name the top 3 brands of hookahs that you have in stock?

It is difficult to distinguish the top brands in the collection, because it is impossible to choose between the limitedness of the «Душа Валькирии» or Nurnburgring and the luxury of Razor CWP2, the transparency of Egeglas and the deliberate clay roughness of Werkbund, the indestructibility of Karma or Wookiee and the elegance of Fibonacci.

– How much does it cost on average to smoke a hookah in your hookah lounge? Can you name the top 3 tobacco brands you use?

The price for smoking starts at 15 euros, which is the average price on the market. A master hookah costs 25 euros. Weekly offers in egeglas – 19.90.

Black: Darkside, Tangiers, Must Have. 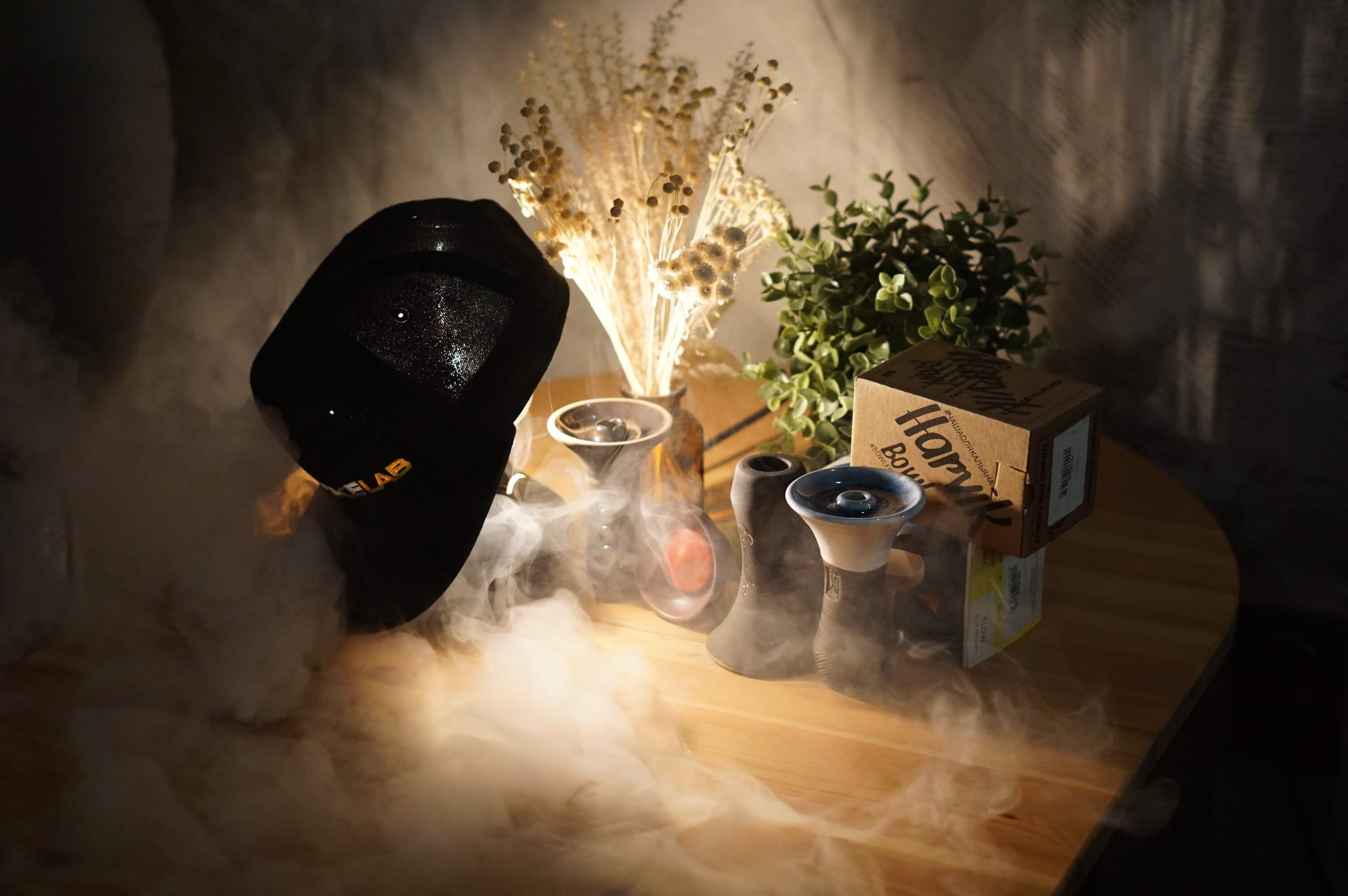 – Is it difficult to find staff (hookah masters) in your country? What do you think about our Hookah Head Hunt service? Is it possible to employ hookah masters from other countries in your place?

When I arrived in Slovakia, I immediately encountered the mentality of the local population, which is significantly different from what we are used to.

The quality of guest service in the restaurant sector is many times inferior to what we are used to in Moscow, St. Petersburg or, say, Krasnodar.

In this regard, we had to develop our own staff training and internship program, which is currently being sold as a training course for everyone who wants to improve the skills of a hookah master.

Now, at the forefront of the selection of staff, it is client orientation and the desire to leave the maximum positive “aftertaste” for the guest from visiting our hookah lounge.

Currently, the staff of the hookah lounge consists of exactly two halves of Russian and Ukrainian guys, mainly students who speak the language and are trained according to our program.

The creation of a pan-European / global portal for the employment of workers in the hookah industry, of course, will have the most positive impact on the possibility of attracting professional personnel. Applicants will also have the opportunity to visually compare offers in different regions and hookah bars.

According to my calculations, the hookah market has about 40 places throughout the country, really high-quality of which can be counted on the fingers of 2 hands. 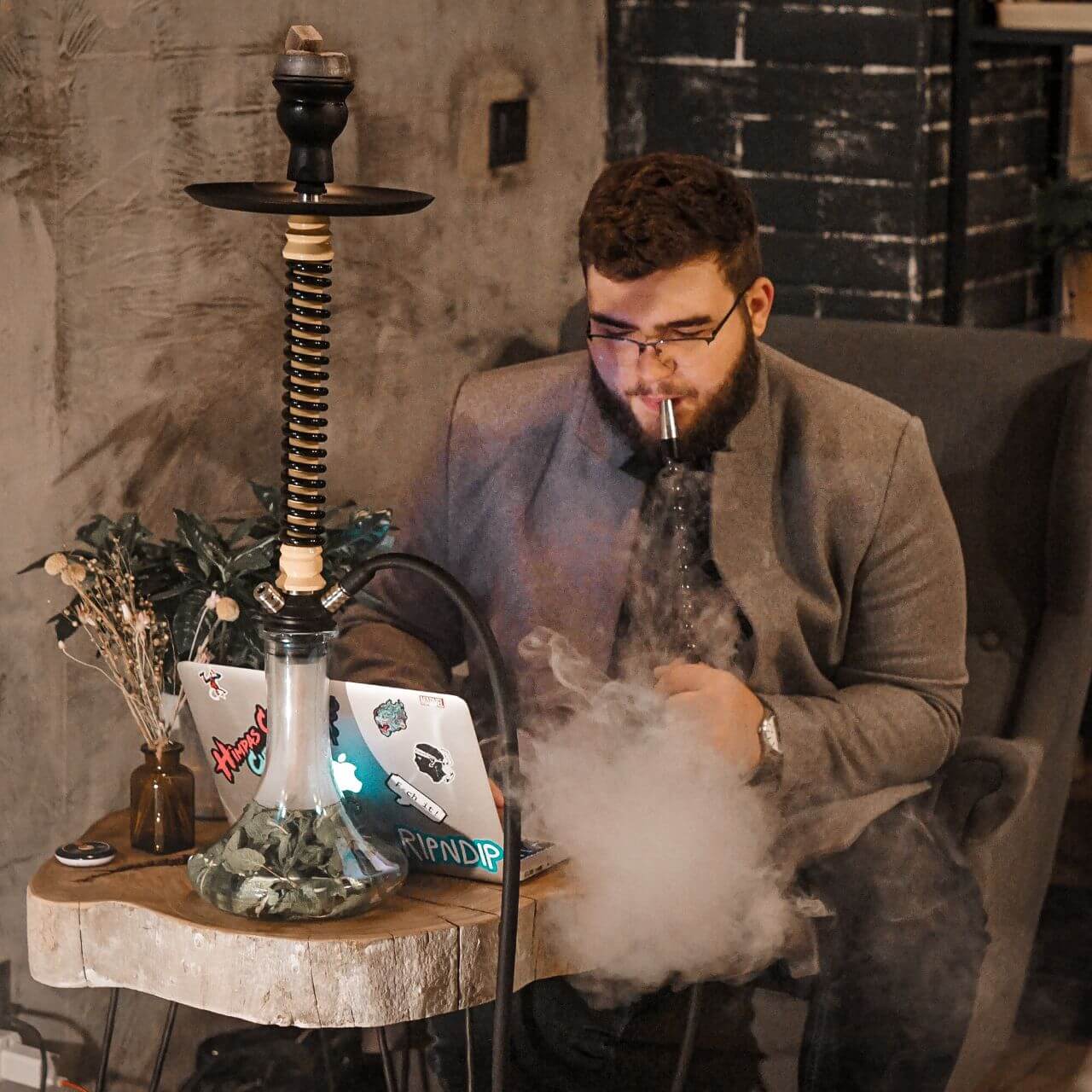 – Are you familiar with the Hookah Battle event-Hookah Lounge Design Award? Last year, we held this event in 9 countries. Do you think it makes sense to hold this event in your country?

This event attracted my attention at the beginning of 2022 because it came to the countries of Eastern Europe. Unfortunately, this year it was not held in Slovakia. Why unfortunately? Well, because we are proud of our concept and believe that we can claim victory in the main hookah lounge of Slovakia category)

Such events will certainly have the most positive impact on the growth of the market and improving the quality of service in hookah bars! We are waiting for you in Slovakia!

– What legal restrictions do hookah lounges have to face in your country? Is smoking allowed indoors?

The situation with tobacco legislation in Slovakia is very complicated.

4 years ago, having arrived here as an enthusiast from the Russian hookah industry and planning to import tobacco products, such as DarkSide and, most importantly, tea leaf mixes, I received a very negative experience of working with customs.

For example, Slovak legislation does not provide for separation by nicotine-free mix and tea leaf is equated to tobacco. The answer from the customs officer was: “If you smoke even your sneakers, we will consider it tobacco”!

As a result, I had to say goodbye to the import ideas, and such excesses with the legislation hinder the development of the industry. For Russian readers to understand, a legal kilogram of Tangiers (which officially entered in 2022) costs 280 euros, the same price, according to my calculations, would be for imported Darkside. For comparison, in Germany, where Darkside is sold legally, its retail price is about 110 euros per kg.

A separate point is the restriction on working even with official tobacco. The current legislation does not provide for printing the pack and damaging the excise stamp.In other words, we must sell the whole pack to the guest and do not have the right to make a mix of different products, since the packs are opened in advance, which means they are illegal. 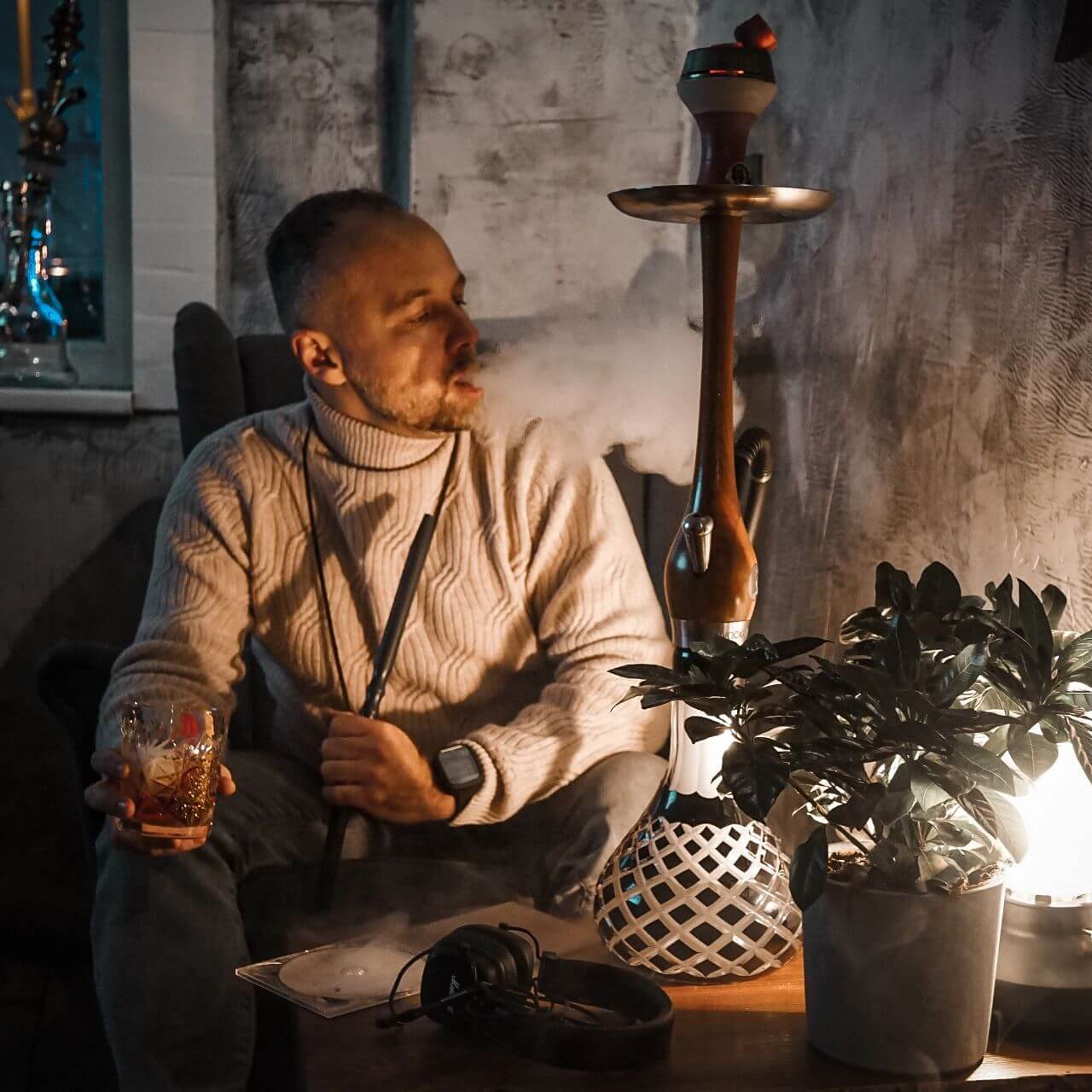 – Are there many people among your guests who understand hookah brands (they can name at least 2)?

A separate reason for the pride of our hookah lounge is our community. For 3 years, we have been teaching our guests not only how to smoke properly, but also what we make mixes from.

I think that about 30% of our guests can theoretically explain the difference between Darkside – Tangiers, or Starline – Adalya.

– Have you ever arranged any promotions when interacting with any hookah brand? (tastings / master classes, etc.)

Unfortunately, I must state the fact that the Slovak market is not the main target of major brands. A country with a population of about 5 million people and the absence of a formed hookah smoking culture, unfortunately, does not attract tobacco and hookah manufacturers))

In our lounge, we regularly record video reviews called “Conversations with a hookah master”, in which we talk about new products on the hookah market and industry movements. However, I have to bring the material for these reviews personally from Moscow by plane or car. Recently, it should be noted, this is really difficult to do. 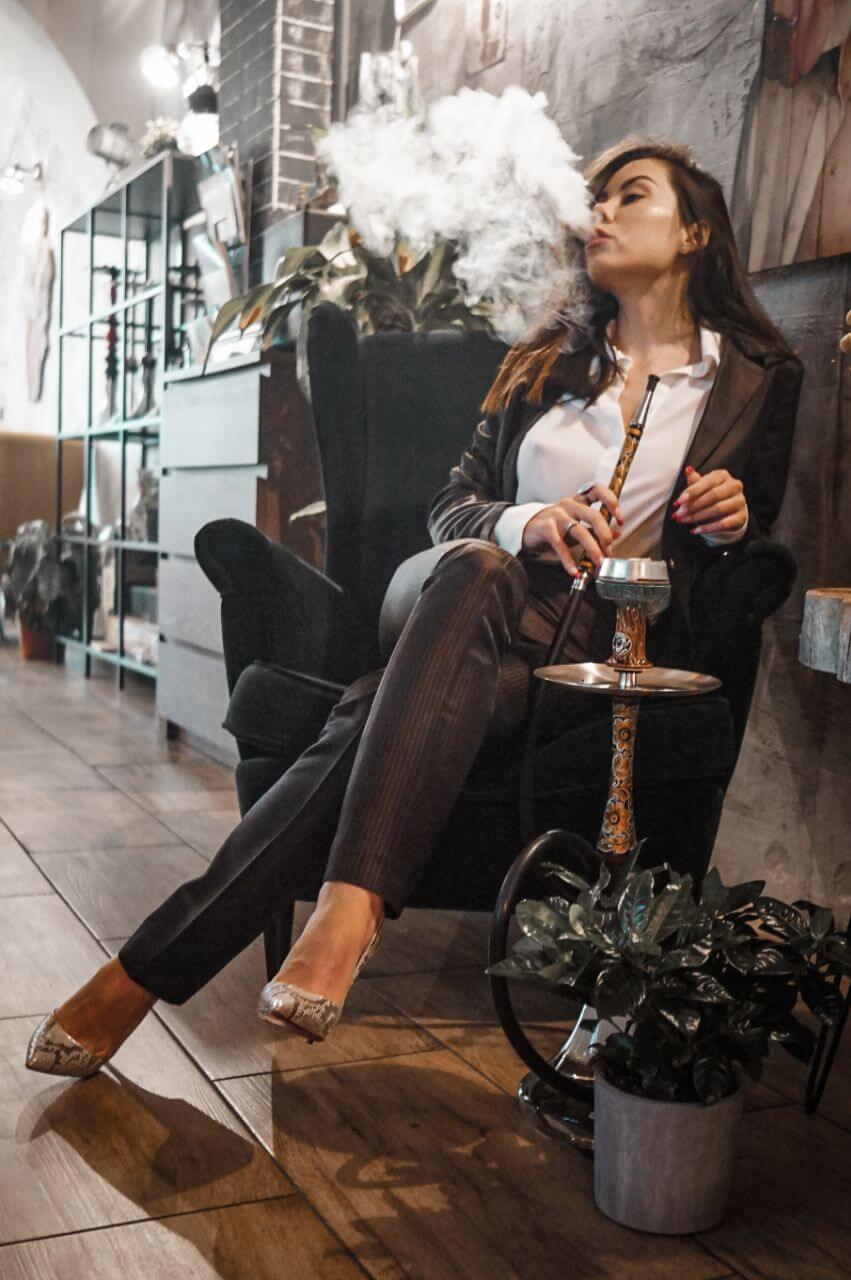 – What are your plans for the future? Are you planning to open new hookah lounges?

The initial plans were to open 5 hookah lounges under the same brand in the largest cities of Slovakia. However, the imperfection of legislation imposes very serious restrictions on the control and operational management of hookah lounges, scattered throughout the country.

Currently, I have curtailed the program for global brand development in the country, but I am looking for premises in neighboring large cities to open hookah bars in the format of 60-70m2 with a more pronounced emphasis on premium and exclusive. Unfortunately, with the price of legal tobacco at 280 euros per kg and the cost of scoring a bowl under 5 euros, hookah smoking will become a hobby for the elite, as it was a couple of centuries ago in Europe.

– Hello, Alexander! Tell us, how did you get into the hookah business?Good afternoon.My name is Alexander Aturov, I am the owner of the hookah project SmoKing hookah lounge in Slovakia, Trnava.I have been smoking hookahs for more than 20 years, I started smoking in Turkey and Egypt as a student.It was in the hookah business that I got about 4 years ago, when I decided to relocate from Moscow,…